Twenty-two-year-old Ali Abdi Madar was born and raised in Kenya’s sprawling Dadaab refugee camp. But when the opportunity arose to go to Somalia, his home country, he decided to take it.

Ali arrived in the southern Somalia port city of Kismayo last February, leaving his mother and brother behind, and said he wants to spend the rest of his life here.

Talking to UN High Commissioner for Refugees António Guterres, who visited Kismayo last week on a short trip to Kenya and Somalia, Ali said he speaks to his mother every night and misses her, but has no regrets about his decision. “If I get a good job, I will bring my mother here,” he said.

Though glad to be back in Somalia, Ali acknowledged that building a life in a country he does not know, which is itself trying to rebuild after decades of conflict, is not easy. “I have finished my secondary school [in Dadaab], but I still cannot find a job,” he said.

Ali has returned under an agreement, signed in November 2013 between UNHCR and the governments of Kenya and Somalia, to assist Somali refugees in Dadaab to voluntarily return to selected areas of Somalia in safety and dignity.

High Commissioner Guterres discussed the agreement and the way forward during his talks with top Kenyan and Somali officials, including Somalia’s President Hassan Sheikh Mohamoud and Kenya’s President Uhuru Kenyatta. “The emphasis is not to push people to go back, but to create more conducive conditions for sustainable return and reintegration in Somalia,” he said.

Currently Dadaab hosts more than 350,000 refugees living in five camps. Ninety-five percent of the refugees who reside there are Somali. The first camp at Dadaab was established in 1991. More than two decades of war and instability, compounded by drought and famine, have led generations of Somalis to settle there, unable to return.

As part of a six-month UNHCR pilot project for voluntary return and reintegration, a limited number of refugees began returning in December last year. So far, more than 2,000 refugees have returned to the Luuq, Baidoa and Kismayo districts.

Returning refugees receive a comprehensive return package, including a cash grant of US$80 per person. Returnees with special needs receive US$100. UNHCR has established a reception infrastructure with way stations at the border and in areas of return, to guide and support the returnees on their journey home. In addition to the three areas identified for return during the pilot phase, another five districts in Somalia are being assessed as potential return areas. Education, health, shelter and livelihood projects are under way to help returnees reintegrate.

During the High Commissioner’s meeting with returnees in Kismayo, Ali told him that Somalis returning from Dadaab were not looking for handouts, but wished to use the opportunity to work with UNHCR and the government to make living conditions more attractive in Somalia. Ali said he talks to his friends in Dadaab and encourages them to consider returning as well.

Other returnees said that while access to shelter, health care and education were challenges, they were still grateful to be home in Somalia.

Meanwhile, on a visit last Friday to Dadaab, Guterres thanked Kenya’s President Uhuru Kenyatta for the country’s continued support of refugees. “I want to express my deep gratitude to President Kenyatta for his reassurance that repatriation to Somalia will be voluntary, with safety and dignity,” he said.

Guterres also reiterated a call for more support from the international community to invest in Somalia. “If we invest in Somalia and Somalia is able to solve its security problems, that will benefit of all its neighbors, including Kenya,” he said. 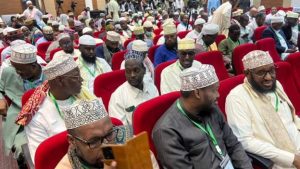